Posted on August 30, 2005 by Piers Barnes-Sherwood

So much for that nice little south-easterly of yesterday – it died away before midnight and since then has just occasionally puffed a bit in our direction, so in the last 24 hours we’ve only managed a measly 60 miles, and have been pretty much stopped dead in the water for most of today.

However I can’t really complain (well I could, but it would be petty) as the previous few days were pretty good with above average mileages, and now we’re just evening things out. It’s also given me the chance to get more maintenance done, and I’ve fixed all of the storm damage apart from the torn mizzen sail, managing to reinstate the first reefing point on the mainsail which is a relief in case of strong winds. Not that it looks like there are any in the offing just yet though! 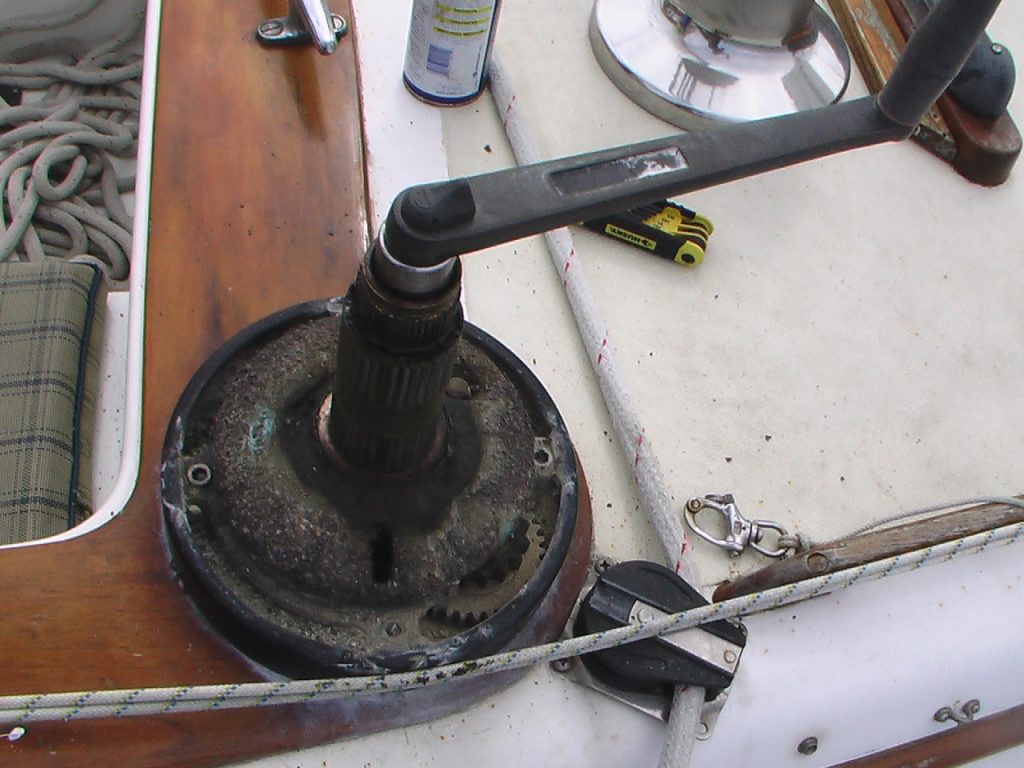 Yesterday I noticed the port primary winch was grinding a bit more than usual, and it gradually got worse until it felt like I was crushing gravel in a big peppermill. On taking it apart today I found that this was exactly what was wrong – it was indeed full of gravel, or salt and mineral crystals which must have accumulated over the years until they’d totally gummed up the workings. I didn’t have a big enough hex key to take it fully apart but managed to flush out all the dirt with lots of water, and now it’s back to normal again. Good thing it was so calm as otherwise I’d probably have dropped half the cogs and springs and things over the side, so I should be thankful for the lack of wind after all.

Actually as I write this we’ve accelerated to the heady speed of 2 knots. At that rate it’s about two weeks to go, but I hope we can go a bit faster as I think I’m almost out of diesel now. I reckon I’ve got between 10 and 20 gallons left, and since I think the engine uses about a gallon per hour I’m going to have to think whether I can really afford to carry on running it for an hour a day to charge the batteries.

If there was enough wind to spin the generator I’d be fine, but there isn’t, so it leaves me in a bit of a quandary. The biggest draw on the power is at night when I go to sleep and leave the radar in watch mode so it’ll alert me if anything comes close. If it comes to it I suppose I’d just have to risk not using it, and in theory I should be OK as so far no ship has come closer than about 3 miles. I don’t bother to turn my navigation lights on at night unless something is within 5 miles as they can only be seen for 2 or 3 anyway, and it’s a waste of power to leave them on.

The biggest drawback of the lack of power is that I might have to forgo my nightly film, which would be a major blow. What on earth would I do? I suppose I could light a fire in the cockpit and entertain myself with a selection of bawdy sea shanties, while toasting Ryvita and knocking back the grog. Actually that sounds like fun – maybe I’ll try it tonight!

This entry was posted in Atlantic crossing. Bookmark the permalink.