Posted on September 5, 2005 by Piers Barnes-Sherwood

Well, this is all getting jolly exciting as I think I can just very faintly make out something which could be land on the far horizon. It’s quite hazy and I could well be wrong, but I’m now just 20 miles from the closest bit of France so it could be possible. Or of course it could be wishful thinking! 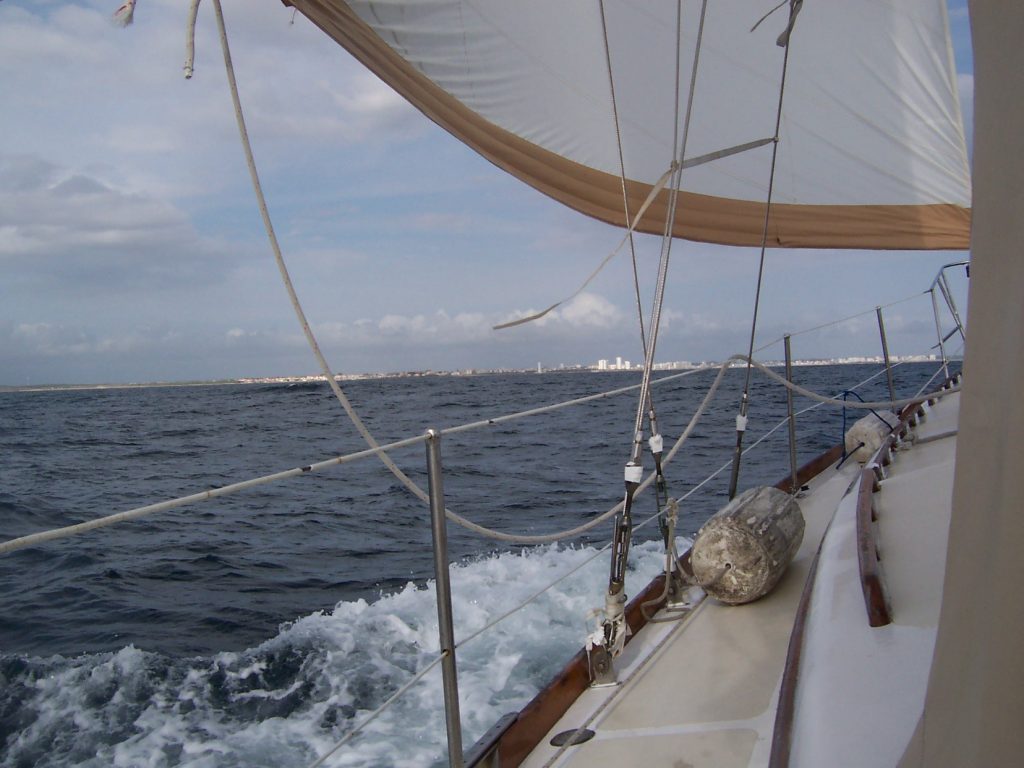 As ever I’ve changed my plans at the last minute. We made excellent progress yesterday afternoon and all night, so this morning I sat down to calculate the tides and stuff for my arrival at La Rochelle and unfortunately it didn’t look good. My projected ETA was around midnight, which is just before low water, and since it’s spring tides today there wouldn’t be enough water in the shallow approaches for me to enter the harbour. I would therefore have to linger offshore somewhere until the early hours to make my entry.

Bearing in mind that I have next to no fuel and would rather not make landfall at night given my possible inability to manouvre I had another look at the chart, and decided that the best course of action would be to alter course a few degrees and head for Les Sables d’Olonne, which lies about 30 miles up the coast from La Rochelle and is the closest harbour to me with all the facilities I need. Given my current speed of 7 knots I should be there around 6 or 7pm local time which would be great.

It’s actually a very fitting place to end my journey as it’s a major yachting centre and is the home of the Vendee Globe single-handed round-the-world race. I can pretend I’m a hearty racing type returning from a punishing circumnavigation so I’d better start working on my tales of freak waves in the Roaring Forties and strange beasts lurking in the windswept wastelands of Cape Horn.

Another good thing about Les Sables d’Olonne is that the entry looks easy by day or night and there’s plenty of depth, but the major boon is that the fuel pontoon is just inside the harbour entrance and is open till 8pm, so that’s definitely my first port of call. My gauge was showing empty today and you may remember a couple of days ago when I last ran the engine it sounded like it was running on vapour, so this is my only worry now.

However, I might just make it. When I bought Odyssey there was a red plastic fuel container marked ‘Gasoline – 10 litres’ under the sink containing a mystery substance which I hoped might be diesel. Today I thought I’d better check so I got it out from under all the soggy carrier bags and odd rubber gloves which always seem to accumulate under kitchen sinks, and took it up on deck to open it up.

First signs were encouraging as it smelt vaguely like I think diesel smells, and had a reddish tint to it. I decided to try the combustion test and dipped some rolled up paper into it, then lit the end. My theory was that if it was petrol it would ignite with a whoosh and take off my eyebrows, whereas diesel would burn rather more sedately. Sure enough it did catch light but fairly gently, and burnt steadily giving off thick black smoke. Hooray – I think it’s safe to put in the tank, whatever it is, as it has at least some of the characteristics of diesel and marine engines are pretty forgiving. At a pinch it might even run on the remains of my drinks locker, though I’d rather not waste it.

After I poured it into the the tank the fuel gauge wavered between 1/8 and 1/16, which means I should have a good few gallons now, and hopefully at least enough to get into the harbour. I guess we’ll find out tonight!

Meanwhile Reg is on his way to meet me there, so I’d better start tidying up this boat which is a complete tip. Honestly, anyone would think I’d just crossed the Atlantic in it!

This entry was posted in Atlantic crossing. Bookmark the permalink.