In a former life I used to be a computer programmer, and may well be one again before too long, so you’ll have no difficulty in understanding how much I like to press buttons. I like it a lot, even if I don’t always know what I’m doing, but I find if I press enough buttons quickly enough then sooner or later things generally work. Sometimes I feel a bit like Homer Simpson sitting at his console in the nuclear power station bashing away at random brightly coloured buttons, which is spooky as I used to work at a nuclear power station. Actually I don’t think I’m supposed to mention that, so please forget I ever said it.

Anyway, getting back to buttons if you don’t mind, Odyssey had one major failing when I bought her and that was her distinct lack of modern technology. There were only a couple of old instruments for displaying the boat speed and distance travelled, along with the depth and the wind speed and direction. They were boring and analogue, with very few buttons to press, so they had to go.

If you’ve seen my recent pictures of the cockpit you’ll have seen my smart new instruments, and I’ve now completed installing the rest of the equipment down below at the chart table, which is the nerve centre of the boat. It looks rather fab, even if I do say so myself, and I’ve now got enough LCD screens to gaze at and buttons to press to keep me happy all the way across the Atlantic. 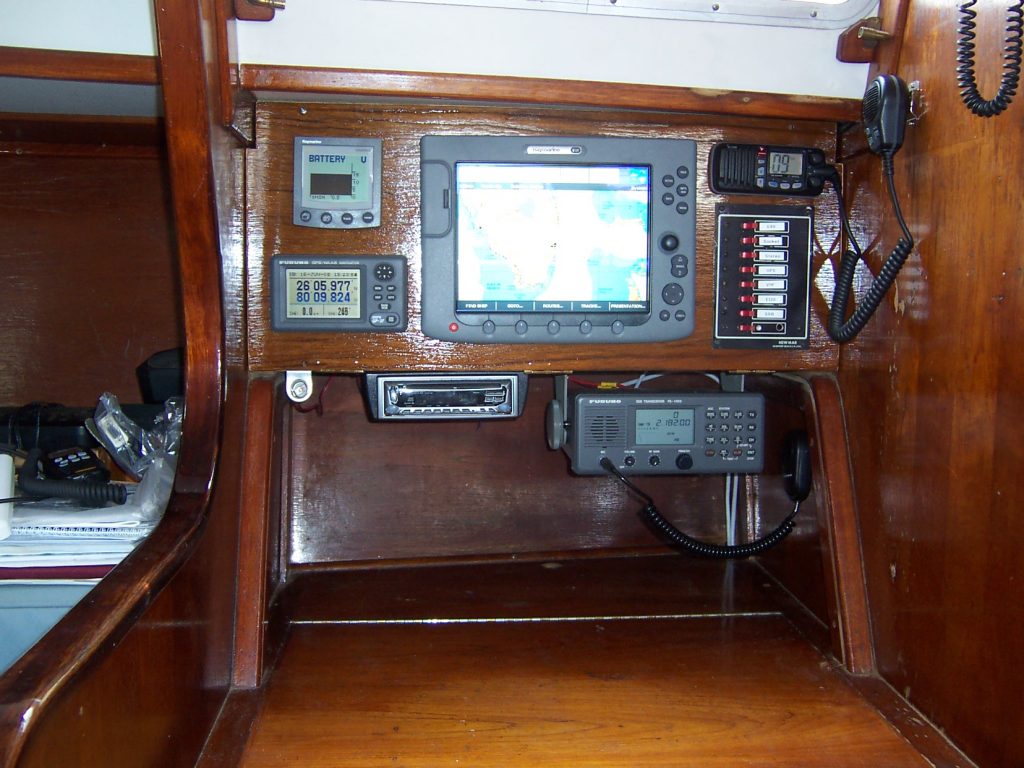 New instruments at the chart table

The centre-piece of it all is the big colour screen which is a combined chart-plotter and radar, just like in the cockpit but bigger, although unfortunately it hasn’t come out too well in the photo due to the flash. To the left of it at the top is a repeater screen for all the other instruments, with the GPS unit below it.

The Global Positioning System (to give it the full name) is a network of satellites whizzing around up there somewhere, and my little box can talk to them to find out where it is. And it works – I turned it all on and the chart-plotter obligingly drew a little picture of a boat right in the middle of Fort Lauderdale, with “You Are Here” next to it in big red letters. It’s supposed to be accurate to within a few metres and will hopefully keep track of me wherever I go.

At the top right is my VHF radio which lets me talk to other boats if I get bored, but only if they’re within line-of-sight, meaning about 15-20 miles at sea. If I want to talk to anyone further away I can use the SSB (Single Side Band, or short-wave) radio which is the bigger unit at the bottom right. This has a range of hundreds if not thousands of miles, or even right around the world when atmospheric conditions are conducive to bouncing the radio waves through the ether. By connecting it to my Mac I should be able to receive weather forecasts for free wherever I am, even in the middle of the Atlantic. Let’s hope I wired it all up right!

Finally, on the bottom left, is my stereo so I can blast out some serious tuneage to keep me awake on long lonely night watches. Or else I could just go to sleep and hope for the best, which is probably what I’ll end up doing.

But what happens if I fall asleep and get run over in the night? Not a lot really, not that I’d know about, anyway, and a big ship wouldn’t feel a thing. It’s all part of the adventure and I’m a great believer in statistics. Sure, some people get mown down by supertankers, but I reckon there’s only a tiny chance of it happening to me.

However, I would be a fool not to take some precautions, so I have a liferaft which is the next thing to install. It’s going to live in a special cradle on top of the cabin, attached by stout straps. In an emergency I can release the straps and chuck it over the side where it’ll inflate, allowing me to climb in and bob around merrily waiting to be rescued. Or eaten by sharks, more likely! If I can’t get to it in time before the boat sinks there’s a cunning device which will automatically release the raft when it gets to four metres down, letting it shoot up to the surface and inflate all by itself, hopefully right next to me. 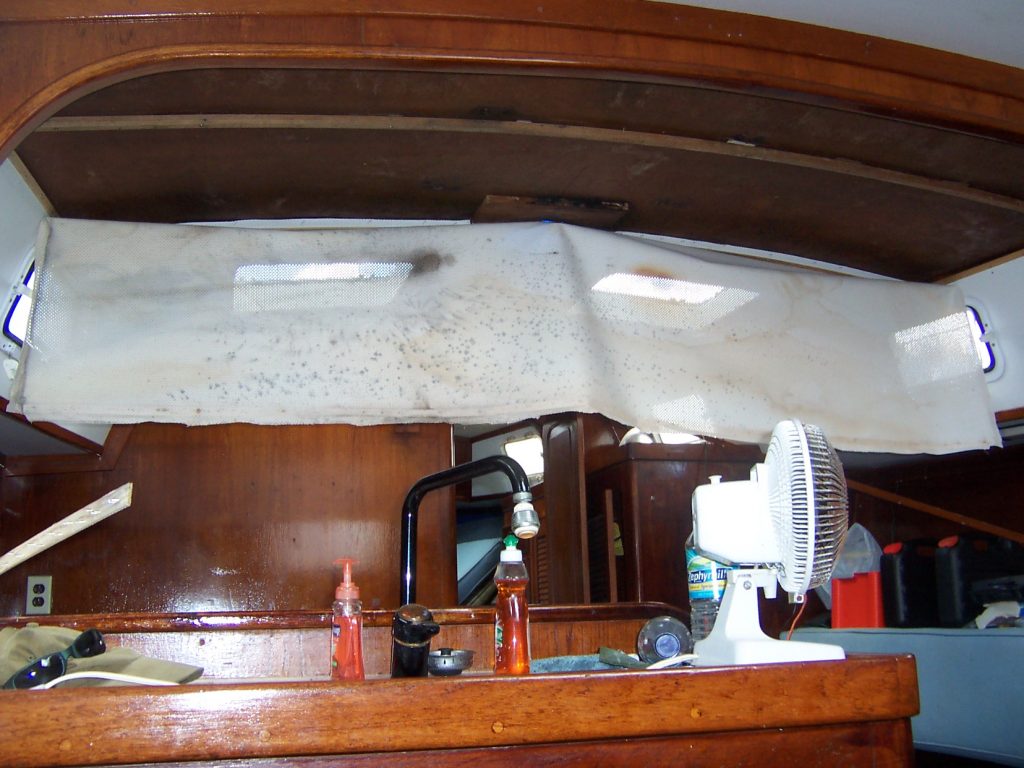 Fitting the cradle is quite a big job as I need to bolt it very securely indeed through the top of the cabin, and this means removing the ceiling trim below. Today I had to unstaple about a million staples, unscrew a thousand screws, and fend off yards of smelly old lining material. This was all too much so after taking a picture (see right) I fled to the beach, and will continue tomorrow if I feel that way inclined.

Actually today was annoying as all morning it was hot and sunny, so I got to the beach around 2pm to make the most of the afternoon. Needless to say it started to pour with rain the moment I sat down, but having been a good little scout as a boy I dug a hole in the sand to sit in for shelter from the howling wind, put up a large umbrella, and laughed at the drenched tourists fleeing the beach. Half an hour later the rain stopped and the sun came out again leaving me with the entire beach to myself. Gold star to self for resourcefulness!