Bring back the feeling

Apologies for the cryptic title, but I’m sitting here in my living room listening to one of my favourite mix CDs at the moment and a tune with the afore-mentioned title is playing. It’s on a CD given out last summer at Orange, the hedonistic Monday morning club in London which I love but can rarely visit, and this particular mix is probably the single most important factor in my conversion from hard to funky house. The DJ in question is The Oli and that morning almost exactly a year ago still sticks in my mind. Thank you, Nigel 😉

Anyway, moving swiftly on to more important matters, I’m pleased to report that Odyssey’s new rig is now complete and looks splendid. This means that I’m nearly ready to leave and that has started to stir some strange feelings inside me. For example, Cap’n Lyle asked me today when my crew were coming out to join me. When I said I was doing it on my own he just stared at me, chomped on his cigar, then shook his head and walked away. He’s ex-Navy so maybe I should be concerned by his reaction – who knows.

Another milestone was passed today, namely the official acceptance of Odyssey into the British merchant fleet. I phoned Cardiff to check on progress and they told me it’s all done, and I’m now pleased to announce that I can bring 22.35 tons of wine back to England with me. Well, that’s my official tonnage, and as we discussed a few weeks ago I gather it relates to how much wine I can carry. 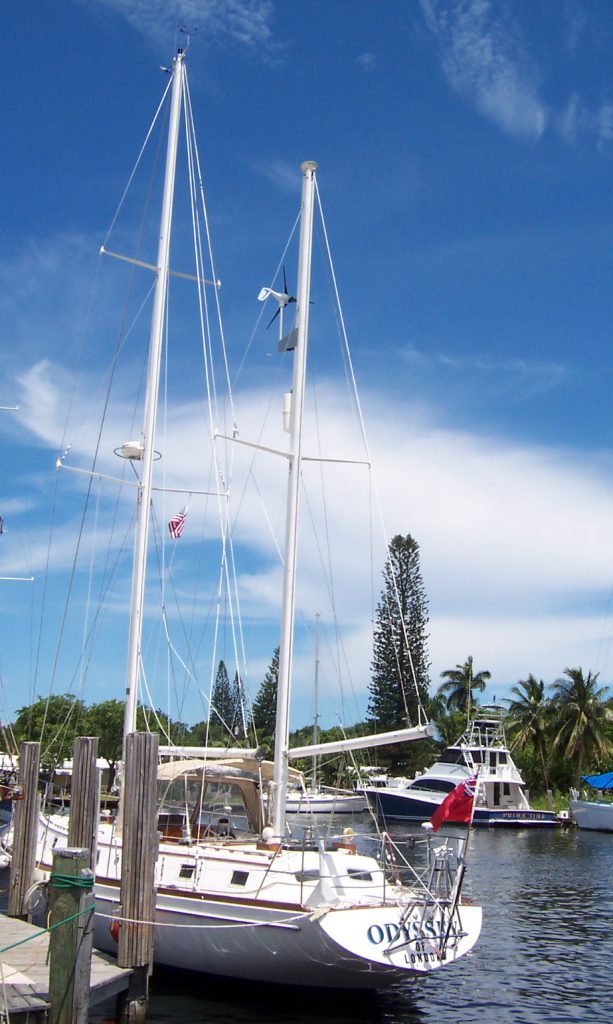 So, with due pomp and circumstance I instructed the rigging crew to be silent and stand to attention while I solemnly hoisted the red ensign on my newly-erected flagpole. It looked splendid flapping around in the breeze, all bright and bold and very British-looking. I’m no nationalist but I have to admit to feeling rather proud to see it flying there.

When abroad one is expected to also fly the flag of the host country from the mast, so I duly raised the Stars & Stripes to my starboard spreader. I asked Tony and Chris (the riggers) if they’d like to sing their national anthem but they declined. Well, actually they said something I can’t repeat, so I won’t.

My other task for today was to install new navigation lights fore and aft. I assume the previous owners never sailed at night as Odyssey’s lights were in such an abysmal state that they clearly hadn’t been used in years. Needless to say this involved running yet more wires the entire length of the boat. The more astute among you might remember me doing this just last week for the anchor windlass, and no doubt the particularly smart readers might point out that I should have combined the jobs to save time. OK, I admit it, my planning is not 100%, which is why I’m still here in sunny Florida when I should be mid-Atlantic by now.

However, I think I vindicated myself as I cunningly managed to lead the wires for the lights through the steel railings of the pulpit so they are completely invisible. It took several hours of dismantling lifelines and drilling through stanchions, but is well worth the effort.