Woohoo! I’ve just got back from my first ever solo sail on Odyssey and it was fantastic 🙂

The day started a little less perfectly when I arrived at the boatyard to be presented with my final bill which was double the original estimate, but to fair they’ve done a lot more than we originally thought was necessary. After picking myself back up off the floor and handing Kitty all of my poor old worn-out credit cards I was somewhat mollified when Brad turned up to present me with a Pier 17 t-shirt and baseball cap, which made it all worthwhile, although as Mike pointed out, it’s probably the most expensive t-shirt I’ve ever bought.

Once on board Odyssey I set to work bending on the sails. I’m really not sure why they call it that, but that’s the way it is so who am I to argue. I soon found that I needed a few odds and ends so had to make a brief excursion to a local rigging shop, but by lunchtime she was fully rigged and ready to go.

Putting off the scary moment I sat down to eat my lunch and calm my slightly zingy nerves. This was to be my first solo trip on Odyssey, and I’ve never handled a boat this big alone before. However there’s no point shying away from it so after finishing my lunch I just got up, switched on the engine, cast off the lines and off I went.

The yard is several miles inland up the New River and there are 5 lifting bridges between it and the sea, all of which open up on request. Once you come into view you just call them on the VHF radio and say something like this (putting on your poshest British received pronunciation accent as it seems to go down well here):

Quick as a flash they come straight back to reply that they will stop the traffic and open forthwith. As I chugged through the first one I gave a cheery wave to the guy in the little booth who operates it, only to hear the radio crackle into life again:

“Thank you for opening, sir”

And then the same voice again: “You’re most welcome. Have a great evening.”

Ooops – and who says the Yanks don’t do irony? I quickly called him up to thank him for opening, and made sure I did so for all the subsequent bridges. People are so polite here! Actually it reminded me of the Hitchhiker’s Guide To The Galaxy where the doors on Zaphod Beeblebrox’s stolen spacecraft always give a sigh of contentment after opening and closing, saying “Glad to be of service”. Nice at first, but by the time you’ve passed through the umpteenth set of doors it does grate a little.

Anyway, back to the plot before I lose it again. Once out at sea I slowed down, headed up into the wind, and went aft to hoist the mizzen. Unfortunately I soon realised that my flagpole was too high and would be knocked off by the boom, sending my lovely new red ensign tumbling into the sea which is probably a capital offence. I decided to leave the mizzen till I’ve chopped six inches off the flagpole, and turned my attention to the mainsail.

On Flogg I always managed to get it up in a jiffy, but Odyssey’s is about twice the size and took a considerable amount of effort with me grinding away at the winch and getting all hot and sweaty. Most ungentlemanly! Maybe I should have crew after all to do this kind of thing. Anyway, after much puffing and panting I finally got it up and sat down for a minute or two to regain my composure.

Once I tightened the main-sheet I could feel Odyssey start to come alive, and so I eased off the throttle while unfurling the genoa. This can be done from the comfort and safety of the cockpit so is much easier. Finally once the sails were set I turned off the engine and sat back to enjoy the silence. Wonderful! 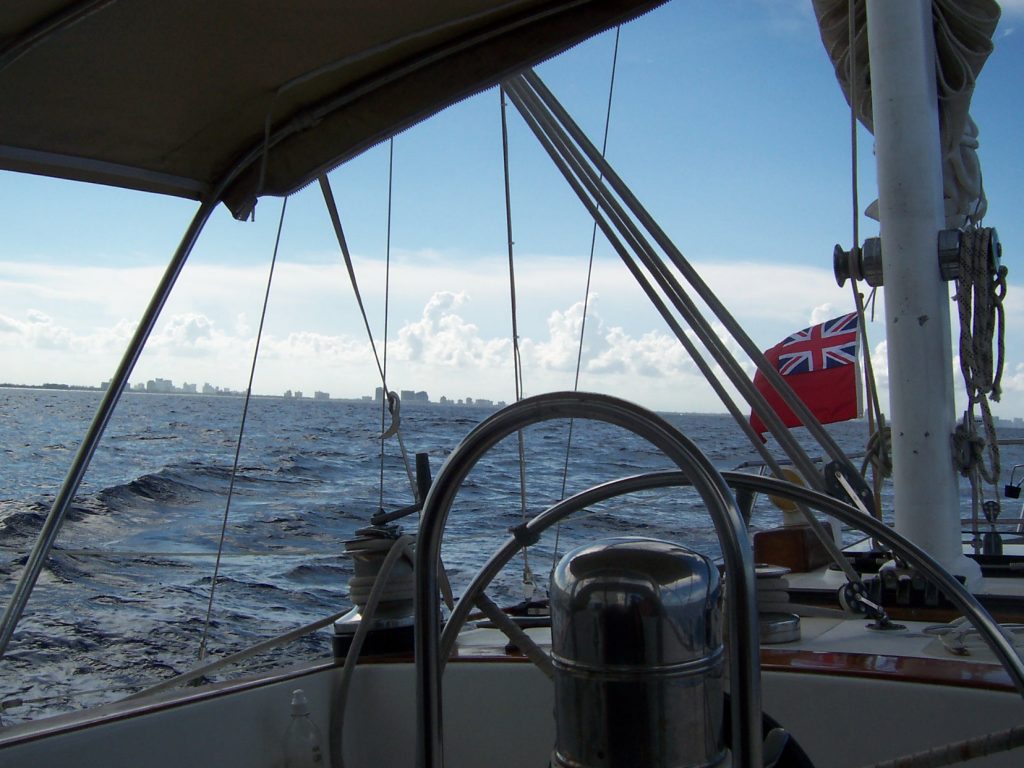 Fort Lauderdale from 4 miles out

The feeling of finally being out at sea was fantastic, and everything was absolutely perfect with calm seas, blue sky, and a gentle breeze of around 10-12 knots. We pootled along quite happily and I tried all the instruments, all of which worked flawlessly. By now we were about five miles offshore and it was already 5.30pm, so after taking a couple of snaps I reluctantly turned around and headed back towards land. It was horribly tempting to just carry on but I have to be patient as it won’t be long now.

Once back inshore I got the sails down and restarted the engine, and was soon making my way up the labyrinth of canals towards my old home of Beach Villas where they’re keeping a dock free for me. Now, anyone who has sailed with me before will know that my berthing skills leave a little to be desired, and my arrival is often accompanied by much grinding of metal and crunching of fibreglass, sending innocent bystanders fleeing for their lives down the dock.

So, this time I was determined to make a good impression and came gliding gently into the dock, leaving barely a ripple behind me. I was astonished to find that despite never having berthed Odyssey before I somehow managed to get it just right, and nosed quietly into the berth coming alongside in just the right spot. Blooming typical though that there was nobody there to see it – always the way when I get it right. Grrrr! 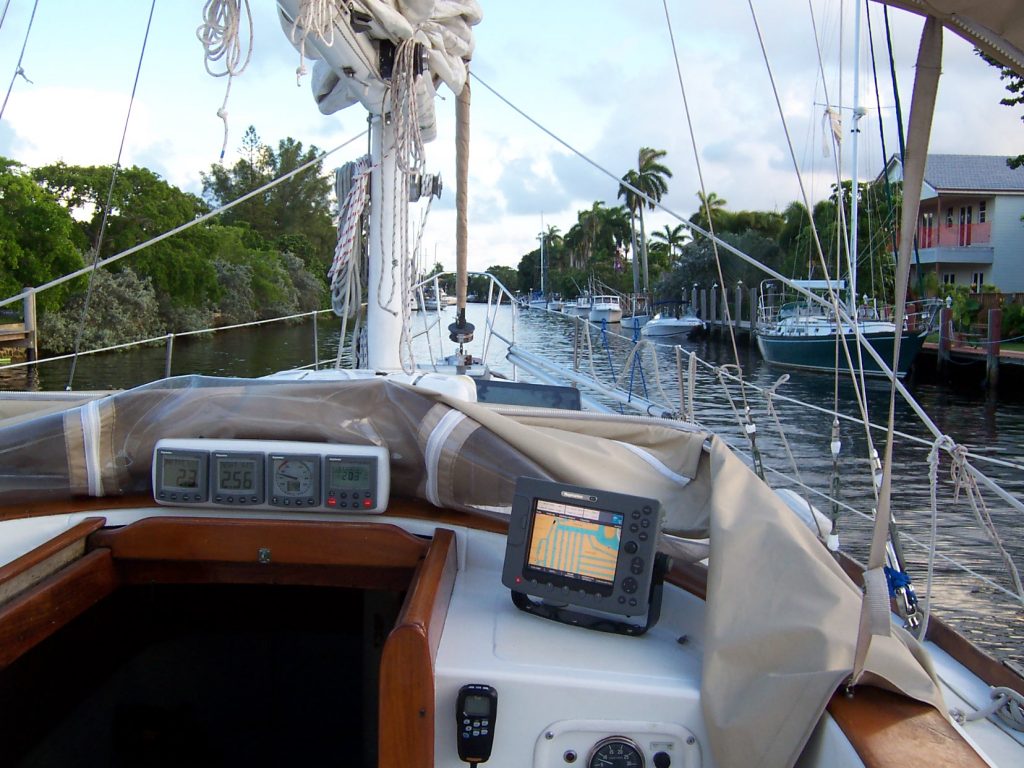 Coming up the canal

Anyway, I’m now back on dry land and all excited and happy and raring to go. It’s so wonderful after all this waiting to finally have a seaworthy boat, and to have had such a great day trying her out. I can’t wait for my next sea trial which will be a full day sometime next week.

Meanwhile it’s the weekend so Odyssey will have to wait as there are dancefloors to rip up and hearts to break. Don’t expect much more from me till Monday as it’s my last weekend in Florida and I intend to enjoy it to the full!!